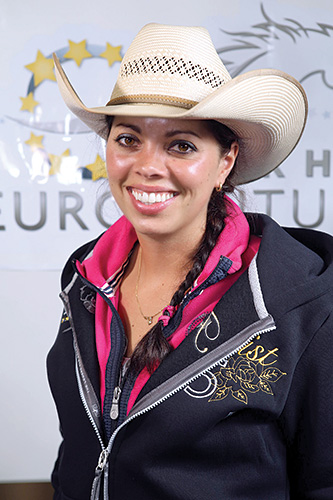 Under Baeck, NF Shining Whiz, owned by Kim Windey and David Perneel, clinched the title of the L4 Open Reserve Championship with a score of 227. She also rode Sailorsarcofpride BB, owned by Ruediger Diedenhofen, and exited the arena with her total earnings amounting to about $50,000 throughout the 2018 IRHA Futurity that ran from December 7-15 in Cremona, Italy.

The Belgian trainer and NRHA Judge won her first NRHA paycheck in 2002 and has actively competed in European and North American NRHA events ever since. Beginning as a youth competitor, Baeck has received multiple honors during the past decade and a half, including the following:

Cira Baeck credits NRHA legend and Hall of Fame Inductee, Bill Horn, for her drive and passion for the sport as he continues to be her biggest inspiration. Other NRHA Professionals, such as Brent Loseke and Bernard Fonck, NRHA’s first European based Two Million Dollar Rider, also have been influential in Baeck’s career. 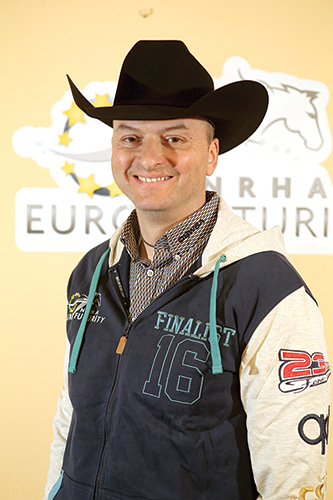 Fonck and Spook Sunburst, owned by Koen Symoens, slid out of the arena holding the L4 open champion title with a score of 227 1/2. On CSG Shinethingun, owned by Katarzyna Roleska, Fonck tied for 4th with a 224 score. Another successful ride aboard GP Hot Revolution, owned by Golden Paint Ranch, brought Fonck’s total earnings to exceed $122,244 throughout the 2018 IRHA Futurity that ran from December 7-15 in Cremona, Italy.

The Belgian rider has competed in European and North American NRHA events since 2002. Fonck has received multiple honors including the following:

- Reiners Gather at Sliders’ Night Out in Support of Reining Horse Foundation.

Oklahoma –
The reining community turned out in force on November 28 to support the Reining Horse Foundation (RHF) at Sliders’ Night Out presented by Toyon Ranch, owned by John and Nancy Tague of Pilot Point, Texas. Held in Oklahoma City in conjunction with the National Reining Horse Association Futurity & Adequan® North American Affiliate Championship Show, the event was a benefit for RHF with the theme of celebrating the National Reining Horse Association (NRHA) Hall of Fame, one of the nonprofit organization’s three core programs. Additionally, RHF manages the Crisis Fund and supports youth scholarships/leadership development.

Sliders’ Night Out was held at the Oklahoma State Fair Park Centennial Building, with its enticing mid-century modern architecture. Purple and copper décor provided an appealing setting for the gathering of 330 reiners and supporters from around the world. On hand to receive the NRHA Dale Wilkinson Lifetime Achievement Award was actor, philanthropist, and equine industry/reining supporter William Shatner. Other highlights included Hall of Fame inductions for the mare Dun It For Chex and the late Bill Bradley (1951-2018). New medallions were presented to more than two dozen Hall of Fame members who were in attendance.

Special guests included a dozen Affiliate Ambassadors, representing NRHA regions around the globe. These attendees were selected for their volunteer service through a new NRHA program also sponsored by Toyon Ranch.

“Nancy and I are passionate about this sport and the mission of the Reining Horse Foundation,” said John Tague. “The support for Sliders’ Night Out 2018 shows we are not alone. From the Affiliate Ambassadors to the Hall of Fame honored guests, and many patrons, this met our vision to create an event celebrating some of the greatest things about reining. We are especially appreciative of the Gold and Silver Donors and table hosts. Nancy and I look forward to Sliders’ Night Out becoming even bigger in 2019 and invite others to commit their support now.”

Shatner attended with his wife, Elizabeth, to receive the NRHA Dale Wilkinson Lifetime Achievement Award, named for a man considered the “father of reining.” Shatner has attended the NRHA Futurity previously, often for celebrity reining events in support of the RHF. A highlight of his awards presentation was a surprise congratulatory video from friend and fellow actor Henry Winkler.

Dun It For Chex was honored as an outstanding producer. What could have been a stellar show career turned into an even more remarkable broodmare career for the gray mare. By NRHA Hall of Fame inductee Hollywood Dun It and out of Silver N Blue Chex, she sits second on the NRHA leading dams list with a produce record nearing $1 million. Now 22, she is part of the broodmare band for Cardinal Hill Training Center in Aubrey, Texas, owned by Joao Marcos. Her offspring Dun It For Whizkey is a marquee stallion for Cardinal Ranch. Eight different stallions have sired her NRHA offspring, with nearly all 21 performing foals being NRHA money earners. In his acceptance remarks, Marcos expressed gratitude for Dun In For Chex and for the causes of the RHF.

A lifetime NRHA Non Pro member, Bradley earned his first paycheck in 1994. His ride across the reining industry resulted in countless connections. The Mount Sterling, Kentucky cowboy was instrumental in helping develop many of today’s talented trainers. He also knew how to be a leader and dedicated his life to leading in his affiliate and on the NRHA Board of Directors, serving as President in 2005. During his tenure, NRHA saw its expansion accelerate in Europe. He also played a key role in establishing the RHF. He died just weeks before his Hall of Fame induction. His award was accepted by his wife, Gloria, and stepdaughter Gabriella “Boo” Kammerer.

To make a donation to the Reining Horse Foundation and commit support for the next Sliders’ Night Out, visit reiningfoundation.com or call (405) 946-7400.